As with the booming internet world, it becomes more difficult for web designers to keep up to date in the face of ever-changing web and UI design trends and development. Given that 2016 is slowly drawing to a close, we carefully pick up 10 of the best UI practices that have been widely used in the past months and can be implementing in the next year.

The Importance of User Interface

Designing a functional site that can generate online traffic and interest among the internet users is an ultimate goal for every web designer. As the user interface, often known as UI, plays a critical role in drawing high volume web traffic to a site, web designers have to give great importance to it during the whole process of website design and creation.

The present era is an explosive growth internet era, which now has emerged as a one-stop source of information, entertainment, social interaction, as well as commerce. More and more businesses are switching to online from offline and completely dependent on the internet for their success.

For success in any online business, you need a user-friendly website to offer enhanced user experience for attracting more online visitors. A good UI design not only is helpful for increasing the site usability but also contributes to smoothly completing any handy task thereby making everything flexible and enjoyable in accordance with users’ requirements.

#01. Video combined with the web 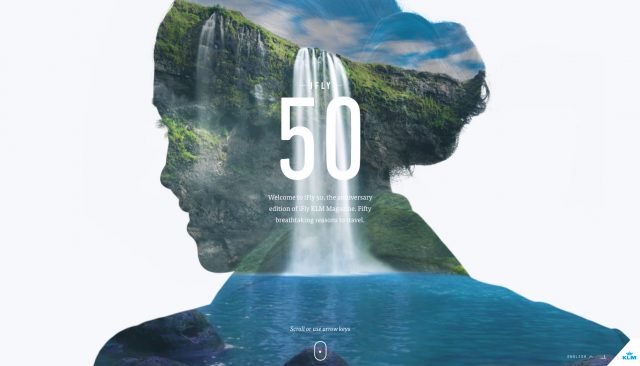 Just as an old saying put it, a picture paints a thousand words. In the world of internet, a good web and UI design is always the best way for quickly grabbing the user’s attention.

Video typically is one of the most effective tools in communication, but it nowadays has been used more and more in digital design. Compared to traditional static photography, video comes in dynamic presence, making it not only a great mean of visual storytelling as well as the easiest way to catch the eye of users.

There is reason to believe the success of conventional imagery has gradually paved the way for its natural successor—the more rich, interactive and full-screen video.

It is true that scrolling is by no means a new mechanic, but a long-scroll and long-form content is increasingly seen to be implemented on desktop devices and larger-screened devices for delivering content.

After users have been used to scrolling to find content on smaller screened devices, a growing number of designers begin the attempt of long form content and scrollable interfaces implementation on bigger screens so that users can scan large volumes of content quickly and easily.

Such long-scroll UI design is particularly welcomed by webmasters who are seeking to guide the users by telling a narrative content in a linear way. And users can consume the content in a single, fluid manner, regardless of what kind of device they are using.

If you are seeking to make your web design stand out from the crow, you can try using some vivid color and gradients.

You may have noticed that flat design had spread like wildfire through the design community since it is initially brought in 2013, leading to content on the web looking very similar and lack of personality.

Instead of full muted tones used previously, more and more brands as well as designers in 2016 began to concentrate on personality. They start experimenting with vivid color palettes and gradients in place of simple while avoiding an all out assault on the eye balls.

Illustrations can be tailor-made to offer a sense of personality and character, which can hardly achieve with traditional photography.

Using a bespoke illustration working in line with the brand’s identity is useful to instill a sense of authenticity and trust in users and customers as well. According to different taste and website content, illustrations could be super versatile. Usually, sleek line-based illustrations present sharp and sophisticated look, while rough-and-ready hand rendered styles deliver fun and playfulness.

The grid has long been welcomed by web designers as it offers a foundation for design to keep consistency, balance, rhythm and order. Most users regard grid as a very important tool in user experience, with which they don’t spend time intuitively navigating through a site or app to make it look natural.

However, we should also admit that the grid can also be restrictive and rigid because it limits creative options for designers. In order to have more appealing digital experience, many web and UI designers are likely to experiment with layout using no longer the grid and rigid baseline structures.

Breaking the grid makes it possible for designers to try out some new creative possibilities, like using layering, motion, depth, and obvious focal points to have real statement pieces.

Parallax is the effect where the background moves at a slower rate than the foreground, giving a sense depth and dynamism as users scroll. It will become over-bearing quickly for users if it is used roughly, however. When it is thoughtfully implemented, it could be great web and UI design that lifts content off the page and engage users. 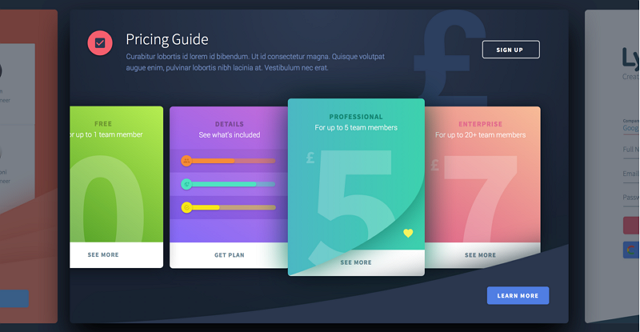 Since it’s first introduced to Pinterest, website card layouts have been a trend for many years particularly welcomed by content-heavy webpages.

More and more designers are likely to build a webpage with card layouts using a lot of scannable data. Most of the time, a card layout is regarded as a more dynamic grid but which focusing on minimizing content to the bare essentials with more items listed together.

When a microinteraction is well designed, it can be very powerful despite the simplicity. It is very common to pin an inspirational photo, retweet a powerful message and like a witty status, letting others clearly understand what is happening, what has happened, and what will happen next.

It has been well recognized that combining font sizes is a great way for the look as well as organization of a page. Some designers prefer to using vastly fonts in different sizes to take up an entire page, creating hierarchy that enables people to better understand a website and find their favorable content. While another group of designers used to smaller fonts as they can guide one’s eyes naturally to the supporting messaging.

For a long time, navigations and menus are always a heated debate among web and UI designers. Especially nowadays, the lines between desktop and mobile UIs are not that sharply distinguished any more, and a growing number of designers starting using hamburger menus on larger screened UIs, therefore the scope for designing menus and navigations having been enlarged.