How to Effectively Manage Your Post Series in WordPress

For experienced webmasters, most of them know that long posts always kill readers’ interests and stop them from reading the whole post.  For beginners, of course, it may be a little difficult in composing long posts. However, sometimes you grasp some interesting topics which just cannot be illustrated clearly in one single short post. Therefore, we recommend you to break the long post into a series of posts according to its structure or angles.

Now, the question is that how to organize and arrange your post series reasonably and interestingly?

To manage this, it is now easy. In the industry, one of the common ways is to display a brief paragraph before the main body of the post, which is to tell readers that the post is part of a series of a certain topic, and also offer a list of the rest of the series in the end of all posts of the series. One thing inconvenient is that you will need to update easy post manually when you publish one new in the series. See, there are many techniques needed to manage a successful post series for your WordPress site.

In WordPress, it can be done with its easy-to-use features or help from simple plugins. Custom taxonomy is recommend to handle these and similar situations. Simply to say, you can build up a simple taxonomy, name the taxonomy as series, and then you can create your post series whenever you need.

In detail, to make it work, you will need to edit manual code and build up a template for your simple taxonomy. For those users who just need to share post without writing the code, these tasks will make them feel confused to composing codes and you will need to do more extra work.

We understand the situation and in order to address it, we plan to write the guide to teach you how to successfully and effectively manage your post series in WordPress even without dealing with code.

Organize Series is a WordPress plugin, helping organize and present the posts or articles you created as part of a certain post series. It cannot only help you make creating and managing post series efficiently, but also help your readers to discover all the posts of the same series and other post series more easily. With Organize Series, you can:

Looking at these features, we believe even beginners can use it to manage their series easily.

The plugin is easy-to-use and works out of the box. So, you don’t have to worry about how to use it, even though you are a beginner for blogging and all you need to do is just to download the plugin, install it and then activate it.

About setup the WordPress plugin, you can take advantage of its Options page, where you can find many options to configure. If you need make some personal or something else, you can check out the place to make changes. The plugin offers detailed explanation behind each option, so you can check out them when you do not if you can change the option.

After activating and setting up settings of Organize Series well, you can use it now, but how?

Organize Series will add a meta box in the Post Edit page. When you are writing a post belonging to a series, you can use the meta box to create a new series or select an existing series you created before. If not, the meta box can be ignored.

When you composing a post which is part of a series, you can use the meta box to give the post a number. If you didn’t do it, the new post will automatically append to the posts written before in the series. For instance, if you have already composed four posts in a series, then the newly created one for the series will automatically be the fifth one if you didn’t choose a number for it.

Specially, Organize Series introduces custom taxonomies in WordPress, so you can customize your taxonomies with its “Manage Series ” menu, which can be found under the post editor. Expect the name “Series”, it is very similar to the method you manage your categories in WordPress. What’s more, you can associate a series with an icon or image in the means of editing the series in “Manage Series”.

Seeing how to use Organize Series, we can find it is intuitive and easy to use, so beginners will have no troubles to use it.

As we introduced the way to create series and manage them via Organize Series, the plugin is not only simple, but also flexible. Even beginner can make full use of its basic WordPress techniques. CSS could be the first thing to be modified. Well, Organize Series offers you the possibility with options on “Settings” page, allowing uploading your stylesheet. 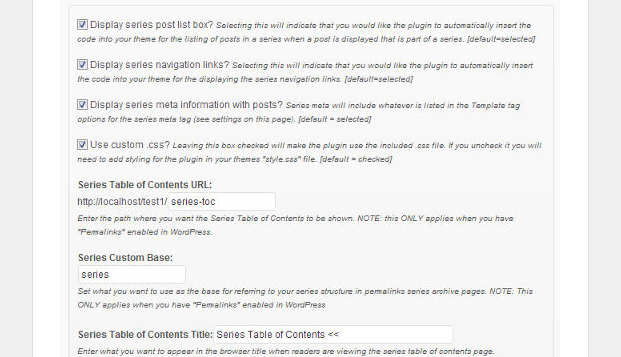 Originally, a new series created by the plugin will be named as “Series” as well. To make it unique and easy to read, you can edit the name according to your needs. On the “Settings” page, you can add the characters or names you want, and then choose for a new series.

In terms of add-ons, there is an Organize Series Publisher, which is free and offered as separate software. It enables you to host on the posts in your series and then publish whole series via one click. You can go to Organize Series official site, where can find more customization instructions and add-ons available.

In the post, we just use Organize Series to be a good example of effectively managing a post series in WordPress. It is well-documented and flexible. For beginners, Organize Series is a good helper. Of course, there are many other options available outside, and many users still prefer to use other WordPress series management tool to do this bog. Well, no matter what feature, services, or plugins you are using to manage your post series well, you can recommend them in comments. To learn more WordPress tips, you can check out our WordPress Tutorials.