In below, we are to introduce 4 programming languages most popular in web development, and show you the best example of each one to help you select a right one for your site at WordPress.

For the uses who learn PHP first time, they may think it looks intimidating, but when using it, it is pretty simple as well. For example, there is a case in Divi theme, and you can find the following code in the single.php file running a single page:

This PHP sentence above is saying that it grabs “header” to see whether the page builder is used, and then grabs ID assigned for the certain content. It is just a single file rushing out and grabbing the content from the DB rather than having dozens of or even more HTML pages which need to be specified individually on your parts.

It is pretty dynamic functionality. Also, PHP is one of the first ways allowing for those dynamic sites. An interpreter is used to parse PHP code that is usually combined with HTML, and conduct certain actions according to certain conditions. Generally, PHP is the language making WordPress be WordPress.

PHP is one of the best programming language options which can help you dig deeper as well as make substantive changes into WordPress. All the functionality you’d like to add to your WordPress website is all written in PHP code. So do plugins.

Although PHP is always unfriendly in reputation, the versions released in recent years have been made more under-friendly and efficient than before. In 2014, it was quite difficult in tracking down bugs as well as fixing ole codes. In 2017, Debugging PHP makes it much easier, just like unraveling a loosely knit sweater, meaning you can stop at where you get what you want.

Additionally, there are more updates made to WP core, so the less intimidating and easier PHP you will get is coming soon. For you to make better websites at WordPress, PHP is of course one of the best programming languages to get.

If you want to learn how to use PHP in WordPress, we recommend you Developer Resources and WordPress Codex. In below, we will show you a PHP code example displaying the post content. You should pay attention to the combination of PHP scripts and HTML.

To set your installation to any multisite, then you just need to add to your wp-config.php.

To get more memory from the limits by default, you can just add

Being with the platforms such as Node.js, Ember.js, AngularJS, and React, PHP and JavaScript’ gap on how much of the Internet is created on is getting smaller.

We know that basically WordPress on PHP, but now about 27% WP core code is written in JavaScript. And, we believe the number will continue to increase as more and more contributions and updates are made. Therefore, we think JavaScript can help you keep up with WP in the future.

Besides, JavaScript is also an object-oriented language, meaning you can set up any object to mode the real things which you want to represent inside your programs, and offer an easy method to access to the functionality which could otherwise be impossible to utilize. In a word, JavaScript can help you get rid of writing a lot of repetitive codes, and make your job done quicker as well as your life simpler.

If you are seeing how PHP or JavaScript is used in the core updates to software, Make WordPress will be a good resource. There are some good examples of what the code looks like, in term of the standards shared between PHP and JavaScript. 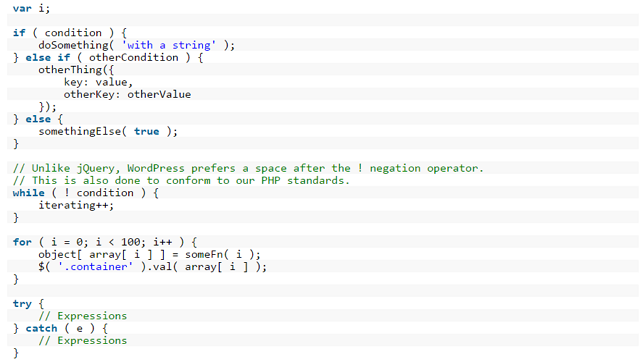 Even though HTML 5 has released many new and dynamic structures, HTML is basically static. If you plan to work with WordPress, then HTML is the language requiring you have some working knowledge about it. WordPress is now moving into visual editing of themes, styles, and content, but learning HTML in and out is always good.

This is a pretty basic language with WordPress, allowing you to separating paragraphs, adding links, displaying text, making tables, and inserting images. In a nutshell, HTML is each page’s skeleton on the internet. Being fundamental, HTML is absolutely running to be one of the best programming languages to learn.

At present, it is still not enough to have skills in HTML only, CSS also need to be proficient with. This is not 90s, and you are not creating a Geocities either; you have to make use of both markup languages to get things done well.

HMTL makes things you want on your sites, and CSS will focus on style, making these things pretty. Namely, CSS can make your HTML pages look different from Geocities. That’s why we think it is one of the best programming languages you can learn.

Because we now do not use Shockwave or Flash, CSS is what you can use to animate your site elements. You can use it to move elements around, shape them as you prefer, and stack them, to make your WordPress site jump through the hoops you want it to.

You can use it in-line with HTML, making CSS special enough, and you just need to add style=”” tag to an element. When entering the style sheets, you may know custom.css. Use one separate file to call every style from one single location, which means it is only loaded once. You will decide whether an element get an id or a class. Note: an id is for those needing specific attention, and a class is used many times across the site.

Especially, CSS’s stylesheets can make you call the server once as well as apply it several times. So, you do not need to replicate the code, while keeping the minimal server requests.

This is an example of CSS code modified from an existing skeleton custom.css file which was copied and pasted into a new site somebody working on. The foundational templates within the file can help save much time, when you are styling the same elements for the site, even though you need to edit it profusely every time. There is the beginning:

HTML and CSS are separate, but they come together like the jalapenos and sweet potatoes.

After we introduced the 4 useful programming languages which can make your WordPress site better. And now, you should know where to start. There are a great number of learning resources, but we are pretty willing to offer you’re the three options below.

The site is free, and has tons of hands-on courses for learning programming languages. Its in-browser editing tool can help you know everything you may need, step by step.

It is free, too.Rich hands-on courses help you know the language you decide to learn. To remain the learning interest, it adds themes to their learning lessons around the stuff such as zombies.

This is now free, but comparing with the two above, it is more like the online school. By using tracks, it makes you feel like you are talking a specific topic on a class, related to your programming language.

Note, we just pick the four languages from the most popular groups, and you can have more options than these. However, you should know the four languages are WordPress’ foundations. Therefore, to make a great WordPress website, you have to learn one of them best.